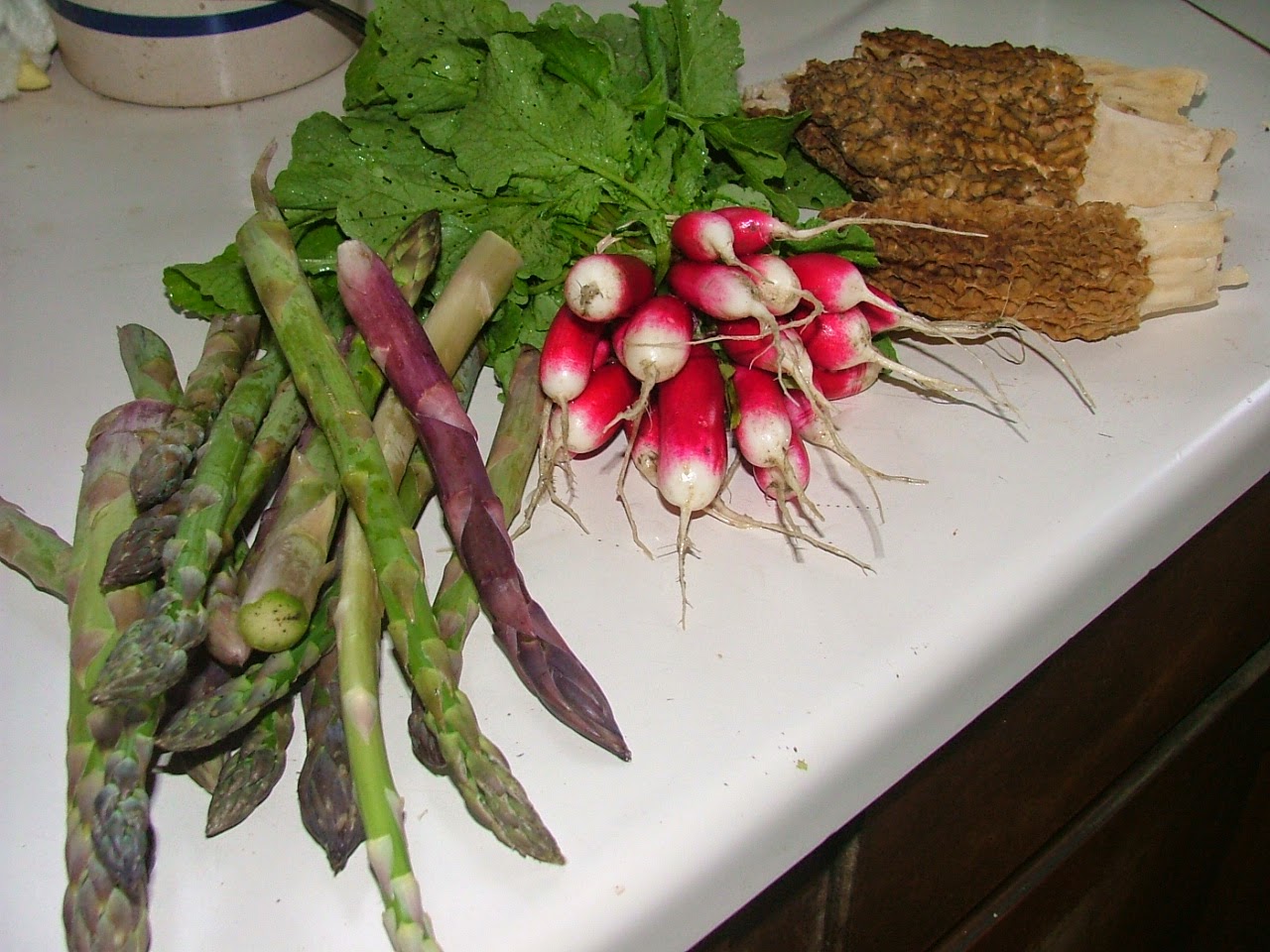 I don't even know where I got my Lovage from.  It was a long time ago, I know that.  And I think I got it just because it sounded like a cool word.  Most people don't know how to pronounce the herb's name, let alone what to do with it.  Lots of people ask me at market what to do with "love-ahhjeh"

Europeans and English folks are much more comfortable using it.  They put it in soups, fold it into egg dishes, toss it with asparagus and green beans, even dry it and combine it with more traditional herbs, like parsley and sage and thyme.

What's best about lovage, like dandelion and nettle, is that it pokes its lime green head out of the soil and announces Spring like one of those first hot days does- even when hot means 60 degrees, and not 16 degrees.

It reminds me of one of those brilliantly colored songbirds, gone for so many months, now back at the feeder, tasting the oranges that we've laid out to lure them close for that fleeting moment before they head off to the forest.  One day last week, I had a rose-breasted grosbeak, a northern oriole, an indigo bunting and a scarlet tanager ALL in the same platform feeder.  Lovage is like that: it's here first, so it begs to be used. Who would think that an indigo bunting would be attracted to an orange in a feeder.

The thing about lovage is that a little goes a long way.  It is in the celery family, but it's spicier- like a cross between fennel and black pepper- and bitter- like arugula or orange zest.  People are scared of it here.  What do you do with it, they ask at market.  And so, I made pesto out of it to show everyone how versatile it is. In the raw, I sprinkle it on asparagus (it tames the sweet), put it in deviled eggs (brings out the creamy yolk), steep it in soup (best with poultry, again, taming that sweetness).

I guess my point is that just because it's different, doesn't mean it's not good.  The songbirds that have travelled hundreds of mile know this when they come to our yard in search of oranges before retreating to the forest.  And we should experiment with learning how to use what comes back to us in spring.  That means to me using one of the first of my perennial herbs to come back to life in the garden.  Here are two great recipes that have passed the teenager's and the midwestern meat-and-potatoes' taste buds.

Snap the ends off of the asparagus, or alternatively, peel the first two inches.  Cut off 1 inch of the tips and reserve.  Slice the remaining stalks thinly.

Heat the peanut oil in a saucepan or soup pot that is big enough for all of the ingredients.  Add the onions and scallions and stir over medium heat until wilted and soft, but not browned.  Add the potatoes and the sliced asparagus.  Pour in the stock, the sugar and half of the toasted sesame seeds.

Bring to a simmer, cover, and cook until all ingredients are tender, about 20 minutes.  Then pour the soup into a blender and blend until smooth. 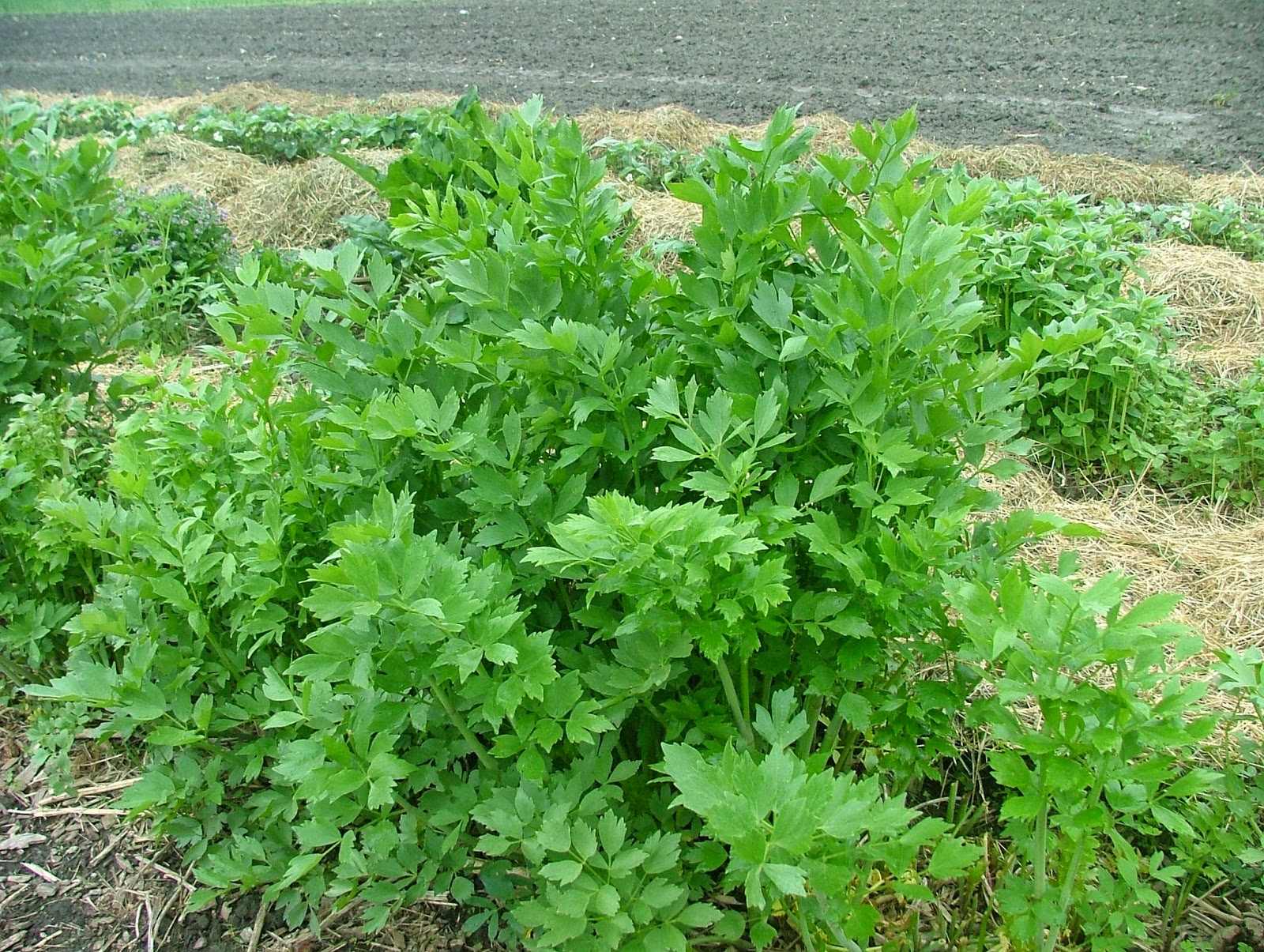 The soup is good chilled or hot, although I prefer it hot.

makes about a half pint

Put the garlic or wild leeks in a food processor or blender, then the lovage and half of the oil.  Blend until smooth (I sometimes add a bit of water to help the process along).  Add the walnuts and the remaining oil and salt.  Let it sit for at least an hour before using.  It will stay good for about 2 weeks in the fridge.

Posted by fat rooster farm at 6:57 AM No comments:

The first time I heard that dandelions weren't native to North America, I didn't believe it.  Then came the hard truth that Vermont's state flower, the red clover isn't a native.  Then earthworms (well most species), potatoes, garlic and all apples except the crab apple fell from grace.  I think I nearly lost it when I found out honey bees had been imported.

To most of us, the dandelion is considered a weed.  Unless you're making a dandelion chain necklace, or playing the mommy had a baby and… you know the rest- game, it's regarded as a troublesome pest.  It invades our gardens and lawns, and those gorgeous yellow flowers turn into poofy,white turbans that stick to everything and fly everywhere.

But in Vermont, where there are literally 9 months of winter, when those first Spring shoots come poking out of the ground, they are cause for celebration.  And their astringent, earthy taste is just the tonic we crave after months of grocery store produce that all tastes like wax boxes and is as crunchy as cardboard.  Like radicchio and chicory, it's a breath of fresh air after weeks of iceberg, or if you're a real purest, no greens at all.

I've used dandelion greens for tea, raw in salads, and chopped in smoothies.  The greens are best before the flowers come out of their pin cushion-like knobs, and they certainly are too bitter to eat after the flowers are in full bloom (though the blossoms make awesome wine).  I chop the base off, pull out any leaves that have hung on through winter's cold (they'll be pale and wilted), and steam them. Then I rinse them and squeeze all of the excess moisture out. I chop them fine and use them as I would steamed spinach or kale.

Besides my pursuit of how best to eat weeds, I am a bit of a cookbook hoarder.  People ask me why I still read cookbooks now that everything can be found on  Dr. Google.  I just like the feel of the book in my hand, and the ability to jump from page to page and back again without getting dizzy when those pages go flicking by on my Kindle or my monitor.

I have Judith Olney's The Farm Market Cookbook (1991).  In it, she describes farmer's markets across the country and how they've contributed to bringing the farm back to the table. 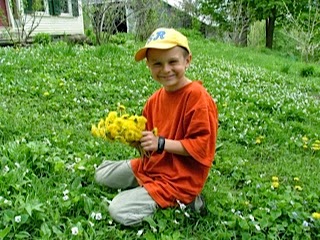 There is a recipe for Maggie's Spinach Nutmeg Muffins for which I used dandelion greens instead of the spinach called for, and used smoked gouda cheese instead of Swiss cheese (dandelion greens are amazing with bacon, so the smoked cheese kind of reminded me of that pairing).

Ironically, I googled Maggie Middleton, who at the time of Olney's writing, owned with her partner, a burgeoning bakery business in Carrboro, NC.  She retired from the business just 6 years later, died in 2009, and requested that donations in her name go to LIVESTRONG, Lance Armstrong's charity.   How fickle life is, where we perceive one reality, and it later turns into another.  Perhaps fame, instead of scandal, will some day be the fate of the harbinger of spring here in the northeast, the dandelion weed.

Here is an adapted version of Maggie Middleton's muffin recipe from Olney's book. I made them using gluten-free flour, and they were awesome.

Stir the dry ingredients together in a bowl.

Chop the cooked dandelion greens.  In another bowl, combine the greens, buttermilk, butter, half of each of the cheeses and the egg.

Make a well in the dry ingredients, and stir in the the liquid.  Don't combine them to a smooth consistency- they can stay chunky.    Spoon the batter equally into the tins, sprinkle with the remaining cheese, and stick them in  the oven.

Bake for 20-25 minutes.  Remove the tin from the oven, and let rest for 5 minutes before popping them out.

These are great with cream of asparagus soup.  You'll have to pull out a cookbook or google that recipe.

Posted by fat rooster farm at 9:50 PM No comments: