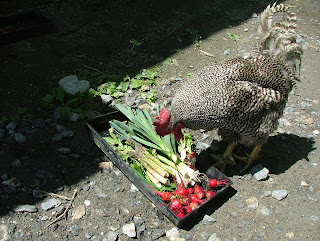 The undeniable fact is that any species’ pursuit of its interests will always have an impact on the rest of the planet’s life-the fox impacting on the chicken population, the flea on the cat, the beaver on the forest, and the sheep on the grass. Living in a bubble, where one’s individual actions (let alone those of one’s entire species) have only a benign effect, or none at all, on other living things, is not an option. Such moral purity simply doesn’t exist. Hugh Fearnley-Whittingstall, in The River Cottage Meat Book. 2004.

I think that the crew is probably about done with my lectures on the hypocracy of veganism; of the complacency of vegetarianism; of the solutions for the world’s ills, based on farming. Well, not done, but, a smile smirks across their faces when I start in, so I know that they know what to expect next from my mouth.

At Fat Rooster, our bubble is always burstable. Like on Wednesday, when Shannon called me at the animal hospital where I work three days a week, and said that that the driving rain had sent the sheep through the fence, toward the gardens. Luckily, the three, Shannon, Brittany and Janet, were able to steer the sheep to the paddock and save the 600 heads of lettuce. Then, when we thought we could begin to transplant wildly—eggplants, corn, tomatoes, peppers, and much, much more, the rains began. We are expected to get a quarter of an inch of rain every 12 hours for the next 7 days. Perfect for transplanting and hardening seedlings, but very hard on the psyche, 7 days of cold and mud, and nowhere to sprawl out and gaze up at fluffy blue clouds.

The sheep pens have begun to get cleaned, and talk about a bubble burster. The barn is not wide enough for a Bobcat to come in and scoop out the three foot high mound of manure and hay that has accumulated during the winter. Literally thousands of pounds of manure need to be pitchforked or shoveled, one load at a time, into wheelbarrows, then carted outside to the manure pile. It is a daunting task. And a challenge. Definitely a stereo is needed to assist in the chore, and as of now, the stereo resides in the greenhouse. The tri-musketeers tackled the project and got about 25 square feet conquered; only 17 times more than that to go…

Kyle made blueberry rhubarb cobbler from berries that we harvested last year and fresh rhubarb. I am sauteeing sweetbreads in gluten-free herbed flour and butter; there is braised baby swiss chard and spinach drenched in minced wild leeks, pine nuts and basil, and a grilled kielbasa to douse in homemade ketchup and relish.

We’re about to watch one of my favorite movies of all times- Strictly Ballroom. Neither Brit, nor Janet have seen it. Nor have they ever tried sweetbreads. Oh, what bubbles …

Posted by fat rooster farm at 9:30 PM No comments: 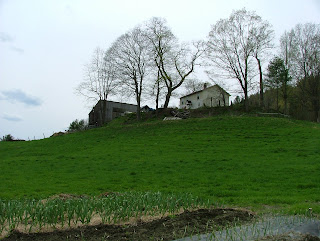 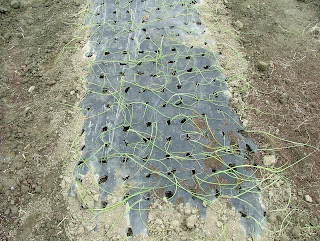 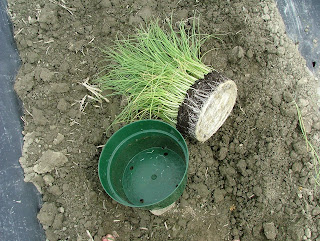 Harold: Maude?
Maude: Yeah?
Harold: [pulls the stamped coin from the arcade out of his pocket] Here.
Maude: A gift!
[reads the engraving]
Maude: "Harold loves Maude."... and Maude loves Harold. This is the nicest gift I've received in years.
[she throws the stamped coin into the water]
Harold: [gasps, bemused]
Maude: So I'll always know where it is.


One of my most vivid childhood memories is having the laying hen chicks arrive in the mail in the spring. It was the harbringer of everything living returning to our cold clime. I must admit that even though I am a born and raised Vermonter, I hate winter. I hate the cut throat cloudless sunsets and the endless dreary days, to paraphrase Ray LaMontagne, but when the chicks came, it meant an end to cold.

We’ve entered the world of technology. There’s wireless internet throughout the farmhouse, and we’ve changed our email address for the first time in ten years. I have Pandora radio streaming through the computer- it’s playing a playlist that Whit created and emailed me from across the middle of the Pacific, where she lives on an island inhabited mostly by birds, seals and turtles. Does all the information make everything harder or easier?

The swine flu panic doesn’t make it seem easier. You can even Twitter its progress across the globe, tracking every suspected or confirmed case. I woke up with a sore throat this morning and wondered if I have it, when really, if I hadn’t had all of this information, I would have just chalked it up to spring allergies. Brittany, one of the new apprentices says that her friend sent her an email that said,”They said we’d elect a black president when pigs flew; 100 days later, swine flu.” Pretty funny. Also check out the Winnie the Pooh swine flu comic. Just Google it, and there it will be. I spent an hour typing song lines into Google to get the artists from one of the playlists that Shannon gave me…got every song title and artist except one in seventeen tracks.

If I don’t hear from someone within two days, I think that I’m being snubbed. I forget that they have lives, too, and that it is spring, and everyone is whirling around, out of control, trying to keep the threads of progress from unraveling into a tangled jumble of summer…

We’ve had two more ewes lamb, both teenaged mothers, both doting on their tiny little lambs. The lambs are healthy and hardy, but I think I might take them to Strafford, where some of the sheep summer on a landscaper’s farm (the ewes and their lambs are there in the pasture to add to the bucolic scene for potential clients, and the owner buys and raises the lambs for his employees for the fall). Both births were unexpected and a complete surprise and joy, given that they’re both fine and healthy.

Peggy the Polish Crested hen is very close to hatching out her chicks. The other little bantam hen hatched out two of nine (it’s her first time at motherhood), and is in a protected corner of the barn. New chicks arrive in the mail, today, and any minute, I’ll get the call from the postmistress, to come pick up the chicks (it’s 5:30 am right now).

There’s a man and his son here doing lots of foundation work on the barn. I want him to build this enormous deck overlooking the clover pasture, where we could languish in the shade of the ancient black locust during the summer, sipping lemonade or chardonnay. Seven grand is needed, though, so not sure that’s a likely reality. He is reluctant to commit to the deck, because I am asking him to be artistic, to surprise me, to show me that I know he is capable of doing this extravagant thing. I’m not sure that I can get him to do it…

It’s onion planting time. They survived being left out in the 18 degree nights, a careless move by me, underestimating the power of windchill. I’ve planted 3900, and there’s only 11,000 to go. We’ve been harvesting wild leeks like crazy, the push for local food fueling the demand. We need to get 60 bunches ready for market on Saturday. Shannon and I have mini contests harvesting them. I’m faster, but hers are far prettier.

Here are pictures of the onions. They are started in the greenhouse in February, in these big pots. Then, the tops are trimmed, and they are unceremoniously dumped out of the pots and separated so that they are put into the ground, bare rooted. Each one is tucked into this biodegradeable plastic (it’s made of corn!), and then left on its own to survive. Onions are resilient. And they are reliable in the sense that they can surprise you with their survivability. So even though it’s a surprise everytime, I’m pretty sure I can count on them to come through.

This has been a tough day for me, beginning at 5:00 am, because I have to drive to the post office to get the chicks, do the chores, and get our son on the bus. Kyle is quick to assume the duties of feeding him and getting him on the bus. I have to figure out how to get an order ready for a store, do a tour for an elementary school, deliver produce to CSA shares (people who put up money when nothing is available, and we use it to buy seed and animals—maybe pay the electric bill--, then they get whatever is available at the farm), deliver to the retail store, pick up my son, pick up the beef that is ready at the shop, cook dinner for 6 guests tonight. Luckily, Shannon, Dana, Heather and Karen team up and cook dinner, so when I get home, everything is ready, and all I have to do is eat.

Which brings us to the chicks, that I have just checked up on, making sure that the waterer is full, and there is grain scattered on the newspaper.

Driving to the post office to pick up the chicks was probably the most rehearsed of the day’s activities; I’ve done it close to a hundred times before. How the rest of the day was going to pan out- not so sure. I was pretty much fried by the time I got the chicks. Gloria at the post office is so nice; she leaves the front door open, so I can come in two hours before everyone else, and do the secret chicken knock, and get the chicks. I crank the heat in the car and head to the PO. When I get the chicks back to the house, Brad has already gone to school on the bus, and Kyle has left for his ecologist job at Marsh Billings Rockefeller National Historical Park, where he works three days a week. I take the chicks to the barn, in the twightlight of the breaking dawn.

The night before, Linda called me from the hatchery. She told me that they had sent 27 instead of 25 chicks, just to make sure that they survived. So now I sit in the dark of the barn, touching each chick’s beak to the water, to make sure that they know how to drink, as if their mother had shown them how. I count, 25, 26, 27. They are accounted for. But I hear peeping from the box, and I spy some dark little thing in the corner. I grasp it in my hand and burst into tears. It’s a little duckling. It looks at me with mournful eyes: are you lost, cause I’m lost. I have no idea why I am here. Do you know?

In that instant, it comes to me that I’d rather be surprised by what is to come- to wait and not be instantly gratified all of the time- to believe that magic happens once in a while, for no reason, and without real purpose. I haven’t named the duckling yet, but maybe I’ll call him Chance.
Posted by fat rooster farm at 9:41 PM No comments: