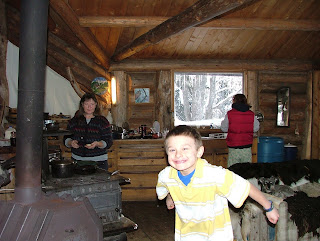 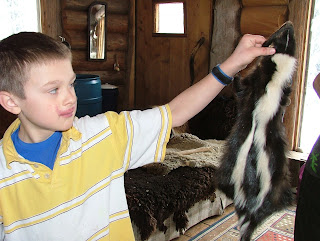 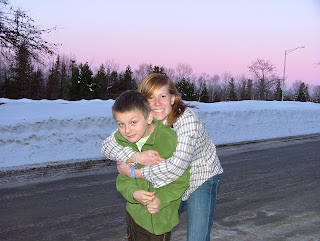 I wanna call Dad, he says to me in a high pitch, after I turn on the tiny solar light, in the corner, near the east window, right where it’s been for the past 20 years. He and Whitney are waiting at the front door until I turn it on. He’s not afraid, he’s full of wonder. He’s amazed, just what I wanted.

At first he protested when I said that I was yanking him from school and going Downeast to Maine, to visit my dear friends Donna, Gerri and Pete. This is the place that I learned how to dig my own well, to butcher a deer, to tan a hide, to can food, to cure garlic for seed, to smoke meat. It’s where I learned how to eat a partridge just killed by a car, how to crack a lobster with just your hands, how to say goodbye to a friend dying of melanoma cancer, just a year and nine months after meeting him. It was a place that was grounding.

Right now, my ten year-old, who just 18 hours ago was in tears at the thought of not having wi-fi for three days, is dragging out skins of cured skunks and Australian possums. Donna’s house is phantasmal. What’s this one, Mom? I think it’s a mink. For those of you who don’t know, Whitney was an apprentice here in 2008, and is probably my closest friend. She’s amazing in her own right, but that’s another blog…

Kyle likes to describe Donna as ornery. She’s done everything, seen everything, and she truly could do anything else. She’s buried a husband and her best friend, she knows how to shear sheep, rake blueberries, preserve any food you can think of, make the best homemade wine you could drink, tan any animal’s hide, make friends with Feds and foes, she’s truly an idol. Right now, she’s working on a collaboration with University of Maine Press to catalog all of the plants on Acadia National Park.

The first night we arrived there, Gerri and Donna had gone to dinner at Oscar’s, a local lobsterman and friend, where I later bought 21 pounds of lobster to freeze at $4 a pound. That they’re gone, and we’re alone in the house gives me just enough time to show Whit and Bradford around. I show them my favorite things: the hand-dug root cellar, right down to granite; the reading lamp made out of sheep’s legs, the sepia picture of Bradford Kausen, whom our son is named after, looking contentedly out onto the water. Whit and my Bradford are rewardingly awed and amazed. This house has been completely constructed by this woman, her husband and her friend’s hands. She is not dependant on anything more than community, friendship and loyalty.

Mom, I wanna come back here with Dad to clean up the Little House. It’s where I lived for nearly two years, helping Brad die, helping Donna, learn to live, with Pete and Gerri and a slew of others. My son gets it. The magic of this place, the necessity of self reliance and close community. What a tonic in this bleak, dormant season of resting.
Posted by fat rooster farm at 5:42 PM No comments: 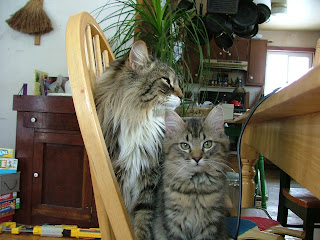 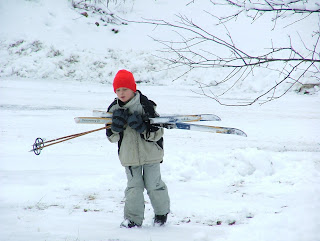 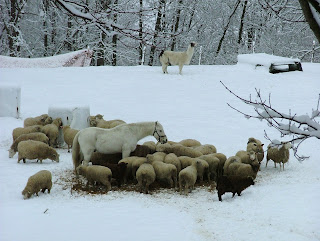 I joke about the fact that from December to March is supposed to be what we call the “down time”. Certainly, it’s not in May, with the frenzy of plowing and preparing and planting, consumed with getting fences up and animals on permanent pasture for the next six months. It’s not in August, when the crops are ready to harvest, and so much needs to be dried, canned, and frozen in order to savor summer’s bounty during the dormant months of winter.

I actually use an alarm clock to wake up in the morning, no bird song or bright light to tell me it’s time to rise and do the chores that never go away: cows, sheep, pigs and chickens all need to be fed, even in the winter.

We’re interviewing potential apprentices almost daily during this time. The state of the battered economy seems to have tipped in our favor somehow; just four years ago, there was only one applicant worthy of consideration. Last year and this, there are hordes of qualified people, looking to learn how to be self-sufficient. From entire families to newly graduated from high school, it’s a tonic to see how much enthusiasm there is out there for wanting to learn how to do it by oneself.

I was explaining just last night to Sarit, one of the people visiting to see whether Fat Rooster would be a good match for her to learn some farming skills, that it is a very unpredictable profession, this farming. I like to have a list of tasks everyday, neatly ordered, from most important to least. But invariably, the list will go out the window. Take this morning, for example.

My plan was to head to Central Supplies and buy sawdust for the chicken coop. A writer from Edible Green Mountains, a magazine about sustainable agricultural practices throughout the northeast (there is an Edible series for most regions in the US), is supposed to come and visit the farm and its chickens. I wanted to spruce up the place because honestly, the January thaw has just begun, and the accumulated manure in the coop of the past three months is a bit, well realistic. On Monday, though, it’s supposed to be in the 40’s, so I’ll get to shovel it out when it has thawed. Then, I have this book with a looming deadline, and I really need to sit down at the computer to finish that up.

At chores, I noticed, in horror, that one of the ewe lambs that I kept as a replacement ewe, has permanent nerve damage to her left shoulder. She got it caught in one of the grates in the barn, crossing to the pen where they spend the night. Her useless leg is dragging now, with no hope of repair. So I’ve called the butcher, and he’s on his way to slaughter her so her meat can be used and her skin can be tanned. At first, I thought it was Maple, the lamb who has been promised to Shannon, who apprenticed here last year. Even though I knew how impractical the thoughts were, when I thought that the lamb was Maple, I was devising methods of casting the leg in my head. It’s not her, and for that I am grateful.

After getting off the phone with the butcher, the phone rang again. A little voice asked, who’s this? It’s me, Mom, I say. What’s up? Visions of swine flu creep into my head. He hasn’t been vaccinated, because I think he already had the flu last year before it was a media staple, when I waited up with the bacons, and his temperature raged for four days, hovering at 106. Mom, he says, did you know that today was a half day at school? No, baby, I didn’t. There goes the trip to the farm store for shavings.

So I guess I’ll punt the day, and write this blog, and get the lamb butchered and work on the book. And play a game of cards with my son and make kale and sausage soup.

Soon, the chickadees and starlings will begin singing their songs of spring. The woodpeckers will drum out their secret knocks to keep potential rivals for females away. The sun will warm the sugar maples and the sap will run. For now, there’s skiing and sledding and snow. And chickens in the house, who can’t survive in the barn. Dad, Brad asks. When are the chickens going back in the barn? When we plant the onions, Dad replies. Interesting, I think. Since this year, we’ll be starting the onions from plants in April, not seeds in February.
Posted by fat rooster farm at 9:33 AM No comments: