"...and the theory of relativity occurred to Einstein in the time it takes to clap your hands. This is the greatest mystery of the human mind- the inducive leap. Everything falls into place, irrelevancies relate, dissonance becomes harmony, and nonsense wears a crown of meaning. But the clarifying leap springs from the rich soil of confusion, and the leaper is not unfamiliar with pain." -John Steinbeck

It seems only fitting that the blog has decided to post my photos backwards, from placid sunshine to green growing things to the impending storm and finally to dinner at the end of the day, all in reverse order.
I am fully aware that I've been silent for over a month, overwhelmed with the growing season and all that that entails. Things are good here, though. In this picture, Bradford is in the foreground, leaping into the picture. Brittany is behind him, then Tali, who cooked this fabulous meal, then Janet, Tyler, and Shannon. Tali cooked it while we got some hay in. The weather patterns have sent low after low scudding across the map, from west to east, and each time, our window for haying disappears into a haze of drizzle and clouds. Today was no exception. Shannon tedded the hay- used a machine that scatters the hay all across the field to dry it out faster- then, by the time I came home from the animal hospital, it was ready to rake into rows for baling. Dana and a very pregnant Heather arrived on the scene just as a huge rainbow and accompanying showers passed just to our east. 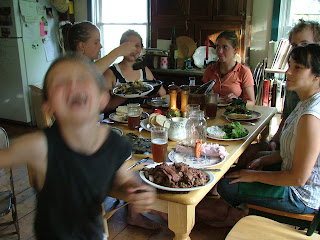 Here, you can see the blue sky disappearing to our south, and the big storm racing toward us from the north and east. We got all but four bales on the wagon before I hollered that I was cutting and running for the barn with Gertie, the 23 year-old truck towing it. Everyone piled onto the wagon, and we made it into the barn just as the rain really let loose. It felt so good to get the hay in before the rain had a chance to ruin it that we all sat around, stunned and wet from the rain. Except for Bradford, who darted like a frog from one puddle to another, soaking wet from the torrent. 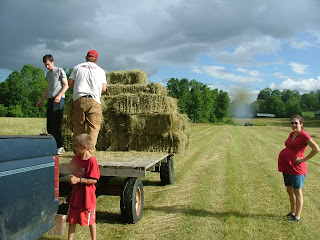 Protected inside one of the two hoophouses are the head lettuces, the bunching onions, and two mammoth cabbages that were wayward strays in the transplanting process, and who we kept out of pity. They are nearly four feet across now, and just starting to head up. 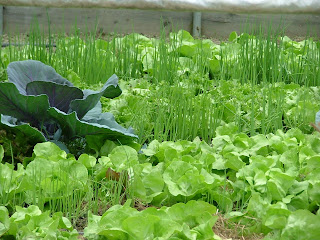 Michael, the 32 year-old horse, is still protecting the sheep. They are doing really well this year. The lambs are beautiful, and it's only a matter of how much hay we can get in the barn that determines how many of them we can keep as replacements. The five cows are comfortably pastured on the hill, and the piggies are growing quickly, thanks to the constant attention of the apprentices. We have squash bugs and Mexican bean beetles. We are struggling to get hay in because of the constant flow of low pressure. We have so much lettuce that we can't sell it all. And still. And still, this farming life is a good thing. It's constant and it's empowering. 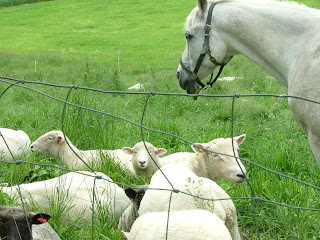 Posted by fat rooster farm at 8:09 PM No comments: