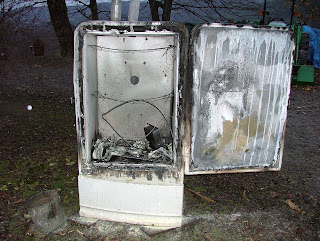 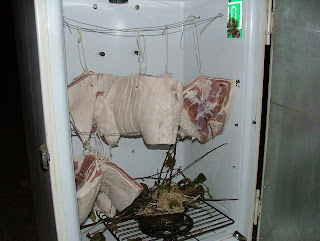 
Yep, it’s true. I can’t wait till the new vampire segment is out. I devoured all of the books, I bought into the fantasy. I love the story. But tonight, I am fascinated by what has been lost in our culture. - the art of making bacon. It has nothing to do with vampires, but everything to do with ecstasy. Who can say (of the meat eating variety) that he or she does not hold a special place in his or her heart for bacon?

It’s just pork, just flesh from the belly of the pig, but somehow, it’s transformed into a delicacy of indescribable sensation...bacon.

Do we know how bacon happens anymore? Is it easier for us to conjure up werewolves and vampires than bacon?

Because I hate what is put into the process of curing a modern day pork belly, I do it all at home now. The pig is killed here, cured here, and last night, thanks to my husband Kyle, the meat began the last process of being smoked here. He made a smoker out of an old fridge. We were lucky, because this was a fridge from the 1960s, metal, ceramic interior, and smokehouse-worthy, so it was well-suited for conversion. There was no plastic interior to worry about, no Freon gas hidden inside its interior to discard.

Kyle spent the day wrapping cabbages in newspaper to store in the root cellar for the winter. They’ll keep in their container until June this way, wrapped in their moist blankets. Kyle asked me what the world would be like when there were no more newspapers, and I had no answer. Will the ability to preserve our food for winter be as wondrous as the existence of vampires? Will bacon be so foreign that it is easier for us to believe that a mortal and a mythical creature can fall in love?

My friend happily signed onto a half a pig for her freezer the other day. She didn’t know that hams and bacon meant extra work. Hams are just roasts unless they’re cured, and bacon is just pork belly unless it’s tended to. Far from pork belly is bacon. She’s
pregnant, so when asked if she wanted it cured and smoked, she said no- savvy to the modern processes of pumping nitrates into the meat to combat botulism, she had no idea that bacon and ham are what they are because of the process they go through- brining, then drying, then smoking, to achieve that achingly good, buttery goodness. Yes, you can cure bacon and hams without nitrates.

In order to finish the bacons in the smoker, I resolve to stay up all night. Bradford has the beginnings of what looks like the swine flu (fitting since I am processing pork), so I have two excuses to stay vigilant tonight. Every two hours, I go out to the new smoker, feed the tinder box with a mixture of dry and wet hardwoods, and fill the reservoir with water. Every two hours, I gauge the fever raging in my son, and swab him with wet wash clothes and prompt him to drink water.

At 3:36 am, after the bacons have turned a golden brown, and I know that I will be awake in just two more hours, and Bradford’s forehead is cool with the sweat of a broken fever, I crawl into bed with two cats and Kyle. It is warm and cozy, and I am soon dreaming of vampires.

I open my eyes to see flames reaching up to our bedroom window, almost 15 feet high. I run out, with a bowl of water for a grease fire, and throw it on the inferno, only to make everything worse. Kyle appears with the fire extinguisher and gives a mighty blast, then another and another.

In my head, I am still thinking that we can save the bacons. I’m yelling for him to stop with the chemicals, that I can put out this inferno which is now melting the ceramic, with water. It’s roaring. Reaching up and over to the bush that lays next to the propane tank which feeds our cooking stove. “They’re gone, they’re gone, it’s gone,” he says, with another blast. He was a forest fire fighter for years… I am out of my element. I sulk back to the house and try to sleep for two hours before my day has to begin. I don’t know what has gone wrong. Did the grease from the bacons cause the hot plate to flame up? Did the string used to tether the bacons to the hanging wire fail and topple the bacon onto the hotplate?

Kyle joins me in bed after he is sure that the fire has been put out and begins giggling at his poetry:

Autumn, and the smell of apple wood smoked bacon drifting toward the bedroom window. The sun is up, flowing in the south window. Wait a minute- it’s four o’clock in the morning, it’s too early for the sun to be up, and from the south???

Be quiet, I say.
Bacon. Do vampires like bacon? I bet werewolves do.
Posted by fat rooster farm at 6:15 PM 2 comments: